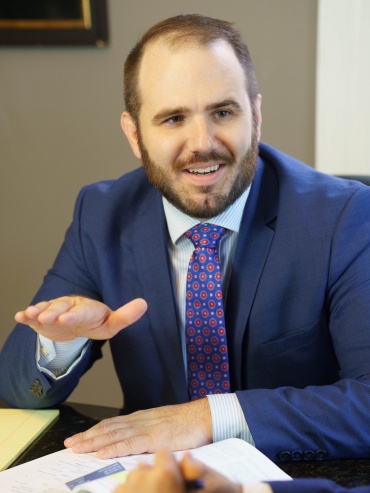 From a young age, I knew that I wanted to advocate on behalf of others in a courtroom. Growing up in Brandon, Florida, I began shadowing a local attorney as early as middle school to learn as much as possible about becoming an advocate for others. Being very competitive, at Brandon High School I competed at the state and national level in both pre-law intramural competitions and winning a team state championship with Brandon’s nationally recognized wrestling team.

I proudly attended the University of Florida where I continued to hone my skills in hopes of advocating in the courtroom. Along with several classmates, we formed a nationally competitive undergraduate trial team defeating teams from Yale and Harvard.

I then applied and was accepted to the best trial advocacy law school in the country, Stetson University College of Law. In all three years of law school, I participated in the school’s number one ranked trial team. I was named the “Best Advocate” by the Trial Lawyers Section of the Florida Bar at their annual state championship my final year in law school. Later that year, I was honored to be chosen by Stetson to attend “Top Gun”, a competition limited to the top advocate from each of the top sixteen schools for trial advocacy.

I was hired by one of the top trial firms in Florida to practice personal injury law. Trying my first case in my second week as an attorney, I quickly gained experience at the highest level dealing with some of the worst possible personal injury and wrongful death claims alongside and against the best lawyers in Florida. I have handled cases involving minor and major car crashes, trucking crashes, slip or trip and falls, youth and adult sports injuries as a result of negligence, sexual assault and molestation claims, and injuries as a result of inadequate or negligent security.

I have had success throughout my practice by focusing individually on each case as opposed to trying to have the “biggest” practice. At Alvarez Gower, we bring a creative, aggressive and relentless approach to each client’s case. We will not rest until we obtain justice for you.

Accessing, using, sending or receiving information through this website does not establish an attorney-client relationship between the Alvarez Injury Law, PLLC and the user. An attorney-client relationship with the Alvarez Injury Law, PLLC will only be established by an express written agreement. Attorneys at the law firm will not dispense legal advice to non-clients and do not provide legal advice regarding states outside Florida.

This website uses cookies to improve your experience while you navigate through the website. Out of these, the cookies that are categorized as necessary are stored on your browser as they are essential for the working of basic functionalities of the website. We also use third-party cookies that help us analyze and understand how you use this website. These cookies will be stored in your browser only with your consent. You also have the option to opt-out of these cookies. But opting out of some of these cookies may affect your browsing experience.
Necessary Always Enabled
Necessary cookies are absolutely essential for the website to function properly. These cookies ensure basic functionalities and security features of the website, anonymously.
Functional
Functional cookies help to perform certain functionalities like sharing the content of the website on social media platforms, collect feedbacks, and other third-party features.
Performance
Performance cookies are used to understand and analyze the key performance indexes of the website which helps in delivering a better user experience for the visitors.
Analytics
Analytical cookies are used to understand how visitors interact with the website. These cookies help provide information on metrics the number of visitors, bounce rate, traffic source, etc.
Advertisement
Advertisement cookies are used to provide visitors with relevant ads and marketing campaigns. These cookies track visitors across websites and collect information to provide customized ads.
Others
Other uncategorized cookies are those that are being analyzed and have not been classified into a category as yet.
SAVE & ACCEPT